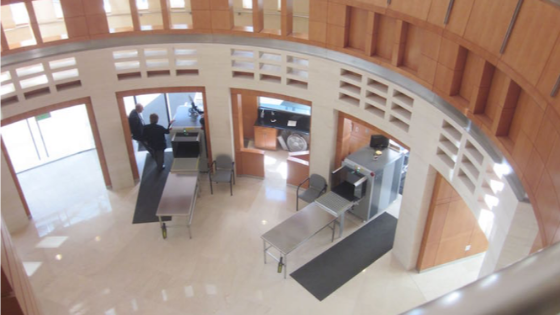 Whether the position is a court security officer, sheriff’s office deputy, or contracted guard, the courthouse relies upon security personnel to keep its occupants safe. Every workday, courthouse employees and participants walk through the courthouse doors and most enter the courthouse through a lobby security screening area. The area typically has an x-ray machine to scan personal items, a magnetometer (metal detector), and often a security station. There are also security personnel present to monitor the safety of the people coming into the building and to ensure that no one is bringing weapons or contraband into the courthouse.

The three areas addressed in this article include lighting, organization, and protective barriers. Each of these can be applied to new construction or improved after a facility has been constructed.

A common problem for courthouse security personnel is the light or glare through lobby doors and windows. This is especially the case when the sun is shining through a curtainwall, preventing security personnel from clearly seeing people approaching the courthouse and entering the lobby. Squinting through sunshine or only seeing a silhouetted figure due to glare prevents a security officer from clearly observing the body language and face of approaching people.

It is critical that security personnel be able to clearly see all approaching people. Observing the body language and facial expressions can alert a security officer to trouble when seconds matter. 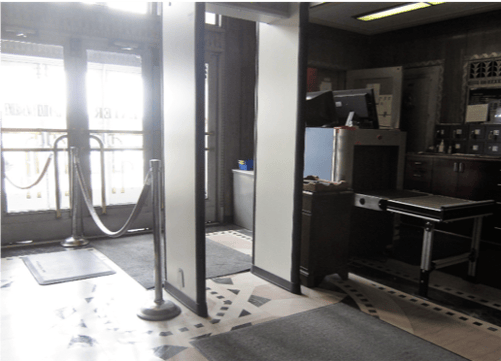 There can be several causes of glaring light. Many modern courthouse lobbies often have ample glass and the angle of the sun can create glare. For example, the security screening can be too close to glass lobby doors or windows at the courthouse entry. Such a situation is shown in the accompanying photo. This is especially true in courthouse lobby areas that are small with insufficient depth to provide distance between the security screening area and the doors.

In such cases, reorganizing or reorienting the screening area (see below) may improve sightlines for security personnel, especially as people are placing their belongings in the x-ray machine or walking through the magnetometer. Another option is to apply a solar film to windows and/or doors to reduce or prevent glare, while still allowing security personnel to clearly see the approach.

The organization of the lobby is another consideration to keep security personnel safe. Here are a few of the common features with respect to organization. 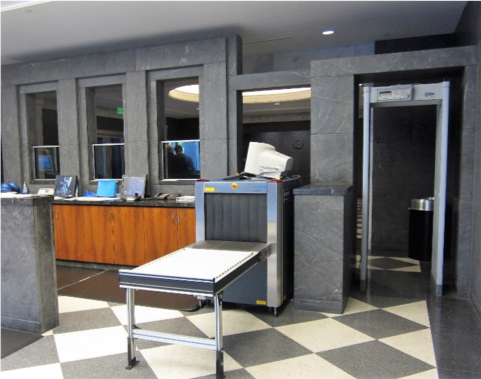 The points above form the basic organization of the security screening area. Different building lobby areas may require a different security layout. The typical security screening area is laid out parallel to the entry doors. However, the below image shows a screening area that is laid out perpendicular to the doors to accommodate security in a long, narrow lobby area. Entering personnel proceed directly through a queue from the door, past the security station, and through the x-ray and magnetometer machines. Note that the exit is marked and clearly defined on the opposite side of the railing. 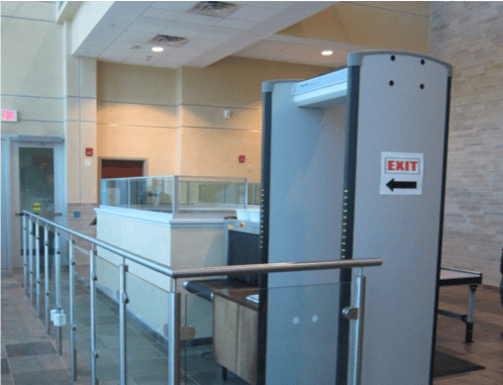 The organization of the screening area can help security personnel by focusing their attention on key checkpoints and by providing a logical flow for people entering the courthouse to avoid confusion and congestion in the lobby area.

One company that produces such barriers is Amulet Protective Technologies, Inc. (Please know that I am in no way affiliated with Amulet. However, when I come across a company that is developing innovative products that can make a difference in courthouse security, I think it is appropriate to sing their praises.)

Amulet makes ballistic barriers specifically designed for interior application - they are lightweight, flexible, and bullet-absorbing. Amulet also makes transparent barriers so that security personnel can clearly see approaching people. (Note that Amulet ballistic barriers are also used for the hardening of judges benches, witness stands, public counters, doors, walls, furniture, etc.) The image below shows an example of a ballistic barrier set up around an x-ray machine to help protect the personnel monitoring the machine.

The image above shows several features of Amulet, including Amulet MA, multiple-attribute, to protect against handgun and rifle shots and Amulet TA, transparent armor for visibility. Amulet also has created Intercept, which is a ballistic detection system that can accurately identify the sound of a gunshot or blast (up to 150 feet) using an energy wave analysis. Sensors, like the location of the one shown in the image above, detect the caliber of a weapon and automatically notify key personnel and first responders for the rapid deployment of security measures (more on this technology in a future blog).

To further protect security personnel, some courthouses with larger lobbies have designed security stations constructed with ballistic-resistant materials. The stations, as seen in the photo below, have walls and windows to more fully protect the security officers. 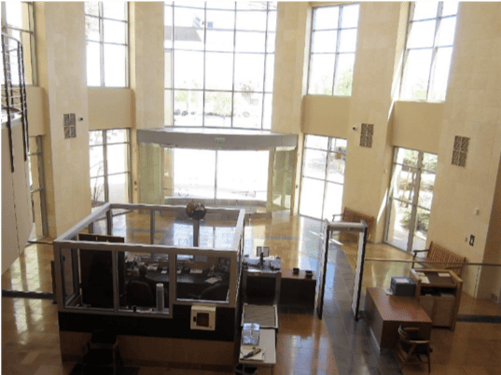 The three topics presented in this article - protective barriers, screening area organization, and lighting - address many of the challenges we commonly see in courthouse lobby security. Please note that there are many other aspects to a properly designed security screening area, including limiting the number of courthouse entrances, exterior sightlines, security policies and procedures, training, threat detection and reporting systems, CCTV coverage, duress alarms, etc.

Courthouse security is a combination of people, technology, and space. When one of these elements is lacking, the other two must increase to accommodate proper security. This article has focused on the space. I highly recommend that courts conduct a professional assessment of their security screening and talk to security personnel to see what can be improved. Making such improvements can save the lives of the people who protect us every day.