The Benefit of Locating Prisoner Interview Rooms Near Courtrooms 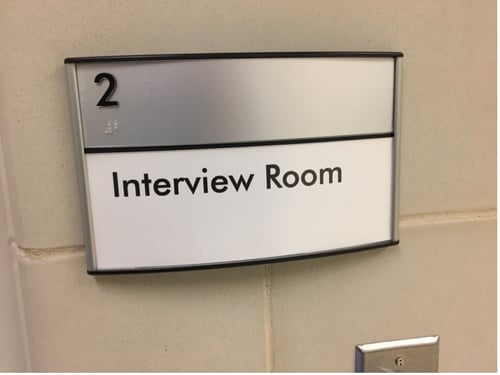 Unlike a typical attorney conference room, which is located near a courtroom and used for attorneys to meet with non-custody defendants, witnesses, and family members, an attorney/prisoner interview room must be configured to provide security that meets prisoner handling requirements. Access to the room should be provided via both secure circulation for the prisoner and separate public or restricted circulation for the attorney. Such a room is typically divided by a transparent perforated stainless steel mesh screen that allows for sound transmission, or one that has a speak hole so the parties can converse with one another. The secure side of the room should be constructed of glazed block wall construction to the underside of the deck, and a secure ceiling should be provided. A stainless steel work surface and seat should be provided at the window. The seat should be secured to either the floor or the wall so that it cannot be moved. Camera surveillance should be provided, and a signal light could be provided outside the room (on both sides) to indicate when the room is in use.

Examples of an attorney/prisoner interview room and the appropriate relationship to circulation are shown in the figures below.

Due to these rigorous security requirements, it seems to make sense for the attorney/prisoner room to be located in the central cellblock. But from a logistical perspective, there is also a strong case for at least one of these rooms to be located near the courtroom – especially in larger courthouses. Let me explain.

The Case for Proximity – Functional Benefits

I’ve noticed that requests to locate an attorney/prisoner interview room near the courtroom have come from courts that conduct a high volume of arraignment proceedings. An arraignment is the first court proceeding in a criminal case. It occurs after a person has been arrested and booked by law enforcement and initial bail terms have been set. In many courts, this happens weekly at a predetermined day and time and is often called “docket day.” Typically, several defendants (we have seen up to 40-50 in one day!) are brought from the jail to the courthouse for arraignment. In some cases, defendants are assigned a public defender just prior to or during the arraignment proceeding. Once at the courthouse, they are typically held in the central cellblock, which is normally located in the basement. They are then brought to the courtroom from the cellblock in groups of eight to ten, and are called before the judge according to the docket schedule. While awaiting their turn, defendants are either seated in the courtroom (often in the jury box) or, more preferably, they are held in an adjacent secure courtroom holding cell area.

Arraignment proceedings move quickly. The judge reads the charges, determines if the defendant has proper representation, and asks the defendant for a plea. The judge then addresses bail requirements or whether to release the defendant from custody on his or her own recognizance. Future proceedings may also be scheduled during this time. The courtroom is usually filled with several attorneys, probation office staff, service providers (such as mental health practitioners) and law enforcement personnel who are tied to one of the cases in some way. There is a lot going on in the courtroom on docket days.

It is often important for an attorney to speak with a defendant prior to, during, or immediately after an arraignment. Attorneys are often asked to discuss an issue with their client during the proceedings and to get back to the judge when they are ready. Many times, this necessitates the attorney pulling the defendant to the side or into the jury box and having this “private” meeting while the docket continues - hardly an ideal situation. The only other option is to return to the interview space in the central cellblock, which is also far from ideal.

It would be preferable to have a private, secure meeting space near the courtroom for these ad hoc conferences to take place. This would also be an efficient arrangement for those public defenders who have not had the opportunity to meet with a client prior to the day of the hearing. The space would also be very useful for probation officers who have supervision responsibility for defendants who have been re-arrested.

Below is a diagram that shows one potential setup of an attorney/prisoner interview room relative to a pair of courtrooms. The specific layout for a courthouse would depend on a number of factors, including existing circulation patterns, holding area needs, and the number of courtrooms served by the interview room. 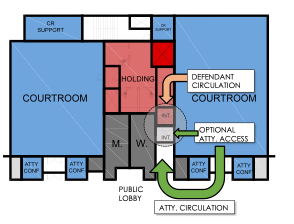 The Case for Proximity – Security Benefits

From a law enforcement perspective, two immediate benefits of a secure interview room near the courtroom come to mind:

Planning for the Future

If you are planning a new courthouse or courthouse renovation project, I urge you to speak with law enforcement, the judiciary, and the local bar association to determine whether it is possible to provide an attorney/prisoner interview room adjacent to one or more courtrooms in your courthouse.

During Matt’s career, he has been involved in many successful projects and facility types, such as courthouses, land ports of entry, hospitals, outpatient medical office buildings, assisted living facilities, and general office space for large corporations. Matt enjoys music and running, and likes to cook.