How Landscaping Can Enhance Courthouse Security

When we think of landscaping around a courthouse, or any building for that matter, we usually consider only the aesthetic value the landscaping provides. After all, greenery can really enhance the look of a building, and who wants a bare building rising from an expanse of dirt or concrete? However, while appearances are in fact meaningful to security (which I’ll get into below), other characteristics of a building’s landscaping, or even the lack of landscaping, are also a major component in building security.

CPTED (pronounced “sep-ted”), or Crime Prevention Through Environmental Design, addresses this issue. CPTED is a holistic approach to security that has been adopted by planners, architects, and security professionals for the design of buildings, sites, parks, and urban renewal projects. The CPTED model emphasizes designing and planning in a way that increases the perceived risk of detection and apprehension in the mind of a person looking to do harm. Aspects of landscaping are among the primary CPTED principles for designing safe and secure spaces.

With that in mind, let’s look at a few key aspects of landscaping that could enhance the security of the building and the safety of those who use it. I’m going to mainly concentrate on the landscaping at a courthouse since I have conducted many courthouse security assessments in my professional life. However, most of the principles I will discuss can be applied to almost any building – office buildings, schools, commercial properties, apartment complexes, and even homes.

How does Landscaping Enhance Security? Looks do Matter

Obviously, a well-landscaped courthouse in a park-like setting has a greater aesthetic appeal than a building that looks like it was set down in a barren tundra. But what does this have to do with security?

According to the CPTED principle of territoriality, aesthetic appeal promotes enhanced security. Territoriality as a CPTED concept suggests that the design of a space should inspire the users with a sense of ownership and community. Users of a building or space who feel a sense of ownership will have a vested interest in the security of the building and site, and will have a higher awareness of potential criminal activities.

A building set on an aesthetically pleasing site is more likely to instill its users with a sense of diligence in matters of security. 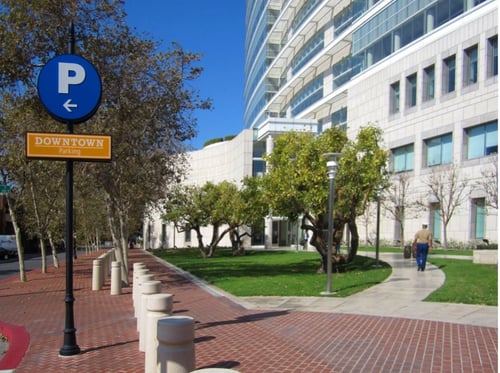 So, what makes for proper landscaping from a CPTED security perspective? Mostly it’s about the placement and maintenance of trees, bushes, hedges, and shrubs. This falls under another main principle of CPTED, which is natural surveillance. Natural surveillance involves security strategies that help security personnel and building users see a potential threat, such as a person loitering by a side staff entrance, before the threat turns into a criminal act.

For example, if the shrubs in front of your courthouse and along a pedestrian walkway are thick and overgrown, they can become hiding places for a person looking to accost, rob, or otherwise harm a courthouse staff member or visitor walking along the sidewalk.

To eliminate these concealment areas, keep shrubs and bushes along pedestrian paths trimmed to no higher than 32 to 36 inches, and set them back three feet from the walkway. The image below shows overgrown shrubs along the sidewalk and at the entrance to this courthouse. Lower shrubs or ground cover are a better option for beds adjacent to sidewalks. 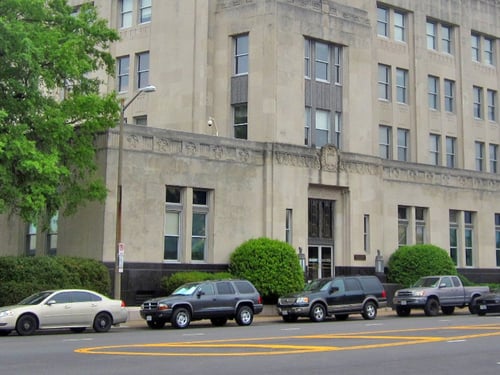 Thorny shrubs such as barberry, juniper, or holly could be placed in front of ground-level windows and close to the building perimeter to deter unwanted activity at or under the windows.

Also, be sure that any stones used in the planting beds are gravel-sized or smaller, or better yet, use wood mulch. Larger loose stones could be used as weapons or to break windows.

What About Larger Landscaping Features? Prune Those Trees

Tree placement, the size of trees, and how they have been pruned are also vital to keeping a courthouse secure. Low roofs, ledges, or climbable trees that are close to upper floors can allow an intruder to gain access through upper-floor windows – windows that may have no intrusion alarm because they were believed to be inaccessible.

Trees should be placed away from vulnerable building access points and branches should be pruned to no lower than ten feet from the ground. Trees should also be pruned so they do not interfere with security camera views. Similarly, when planting young trees, consider how the tree’s eventual growth might block camera views.

The picture below shows a tree that has grown full and mature, but is creating a few security issues: (1) it is near the building and climbable, allowing access to upper floor windows, and (2) its full canopy is blocking security camera views of the sidewalk and pedestrian approach to the building. 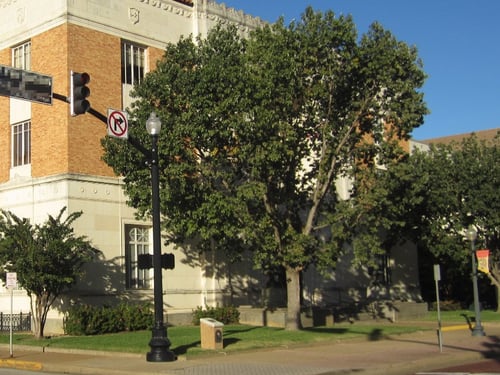 Landscaping can also help define property boundaries. According to CPTED security concepts, clearly marking the boundaries of the property can deter illegitimate users who may otherwise walk onto the property unchallenged.

A tree line or hedge along the public street and sidewalk can help establish this boundary. Some courthouses may choose to surround their property or a parking lot with a fence. If the fence is meant to keep intruders out (such as the fence around an access-controlled parking lot), then it should be the anti-climb type, with vertical pickets rather than horizontal features that could be used as a foothold to climb the fence like a ladder.

The fence should be see-through to allow security personnel, police, and even other passersby to see into the area bound by the fence. This ties into another CPTED strategy known as “eyes on the street,” or in this case, eyes on the parking lot. The idea is that the more eyes looking at an area, the more natural surveillance there is, and the safer it will be. Again, the use of thorny bushes at the bottom of the fence on the public side will help deter unwanted individuals from getting too close to the fence. However, the bushes need to be short to allow for natural surveillance through the fence, and tree branches should be trimmed to prevent the tree from being climbed to gain access over the fence.

An exception to the see-through fence recommendation would be a security fence or wall encompassing a judges’ parking lot. In this case, a high, solid masonry wall or other barrier that provides visual privacy should be used. However, just like the property line fence, make sure trees near the wall are pruned, and low, thorny shrubbery is used.

The idea of pruned trees and low shrubbery applies to other parts of the property boundary as well. Patrolling police cars should have a clear view of the property from the street, especially after hours, to see potential intruders or suspicious activity. Keep the bottom of the tree canopy high and the tops of hedges and shrubs low, as the diagram below indicates. 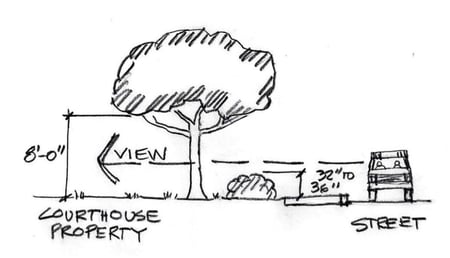 Remember, to prevent your landscaping from becoming a hindrance to good security, maintenance is the key. Stay a step ahead of unruly landscaping from the start by choosing the right plants that grow slowly and predictably. It is vital to include a regular landscaping trimming and pruning plan as a part of your courthouse’s regular maintenance regimen. Keeping your greenery neat and trim not only looks good but also enhances the security of your courthouse and the people who use it.