CPTED (pronounced “sep-ted”) stands for Crime Prevention Through Environmental Design. It was developed in the 1970s from an earlier 1960s' concept for urban planning and renewal known as "defensible space." Since then, it has become more widely adopted by planners, architects, and security professionals for building and site design of all types.

CPTED is built upon the idea that a person’s decision on whether to commit a criminal act is heavily influenced by the perceived risk of being caught in the act of committing or preparing to commit a crime. Therefore, CPTED puts emphasis on designing, planning, and manipulating the built environment in a way that increases the perceived risk of detection and apprehension in the mind of a person looking to do harm. The term “built environment” refers to the human-made structures and surroundings that provide a setting for human activity.

This differs from the traditional ideas of target hardening in which access to a crime target is controlled through mostly mechanical means, such as locked doors, high fences, or the following:

These are still important strategies, especially for a courthouse or similar civic building, but taken to extreme these can result in fortressing, where the building security begins to feel like that of a medieval castle. This type of security can be imposing and stifling to the intended users of the courthouse – both the public and staff – resulting in a negative impact on the functionality of the building.

Planners and architects have embraced CPTED as an alternative to fortressing. However, CPTED is not meant to supplant the target-hardening strategy for courthouse security, but rather to work in concert with that strategy as an overall approach to creating a safe, secure, and welcoming courthouse and site.

CPTED can be applied to all parts of the design and operation of a courthouse and similar buildings, but for this blog I will focus on the site and perimeter. The five basic principles of CPTED explored here are:

Let’s take a look at how each principle can be applied to the safety and security needs of a courthouse.

Natural Access Control. As mentioned above, the access control most of us are accustomed to is often called mechanical access control (e.g., the use of door locks, high walls, gated fences, etc.) to limit the opportunity for crime. Natural access control, on the other hand, relies on designing spaces and circulation patterns to create a clear differentiation between public and private space.

In a courthouse site and building perimeter, private spaces that are off-limits to the public could include the staff entry, judges’ entry (including garage doors), loading docks, mechanical rooms with exterior doors, and building roofs. In the case of a building roof, a natural access control strategy would be to verify that there are no trees, dumpsters, or other objects that could be climbed on to gain access to the roof. Trees should be trimmed so that limbs are more than 10 feet off the ground, and dumpsters should be moved away from buildings.

Private spaces would also include circulation paths to travel to non-public areas, such as a sidewalk leading to a staff entrance or a drive lane leading to a judges’ parking area. In general, public spaces should be limited to the main entrance and the paths of travel to this main entrance (such as a sidewalk from a visitors’ parking lot). To achieve this, the public entrance needs to be clearly marked. Wide pedestrian walkways, signage, lighting, and monumental design can all help create a public entrance the public can’t miss.

A basic principle of CPTED is to remove excuses for crime. The design of the courthouse site and public entrance should give no reason for members of the public to wander or loiter around sensitive areas such as the staff entrance, loading dock, or vehicular entry into the judges’ parking garage. The greater the number of people wandering around a site, the more difficult it is to spot legitimate users who may be lost as opposed to those who are there to do harm or commit a crime. 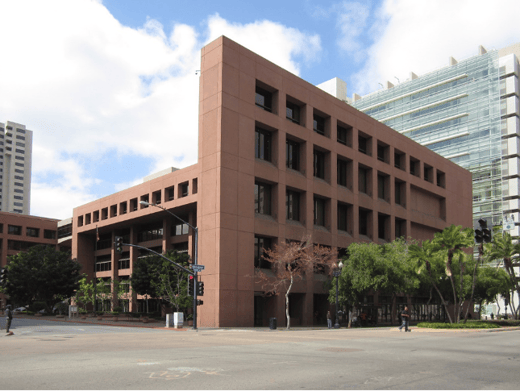 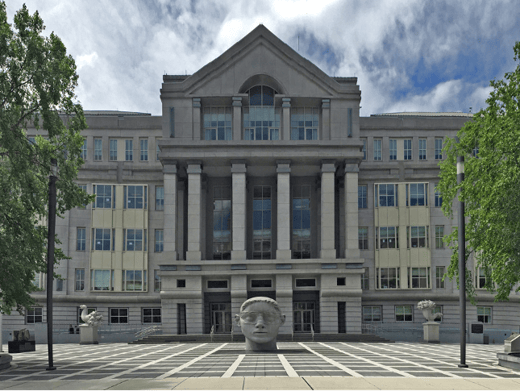 Territoriality. Territoriality as a CPTED concept suggests that the physical design should create a sphere of influence so that users of the space feel a sense of ownership and a sense of community. Users of a building or space who feel a sense of ownership will have a vested interest in the security of the building and site and will have a higher awareness of potential criminal activities. The concept of territoriality leads to more eyes looking out for suspicious activity.

CPTED natural surveillance strategies help security personnel and other users of a building see a potential threat, such as a person trespassing by a side staff entrance, before the threat turns into a criminal act. This can be done naturally by incorporating certain features into the site and building sign, such as staffed offices with windows overlooking the site. More windows mean more “eyes on the street,” a term coined in the 1960s.

Natural surveillance relies not only on people noting and reporting suspicious activity but on the perception that any suspicious activity could easily be spotted. This perception acts as a deterrent to criminal activity. A side door surrounded by office windows would serve as a deterrent more so than a back door next to a windowless loading dock.

Other natural surveillance strategies include:

Image and maintenance. A courthouse, or any structure, that looks well maintained will be a less attractive target for vandals and graffiti artists - and possibly more violent criminals. A theory known as the Broken Window Theory suggests that visible signs of decay and disorder in a building and its surroundings send a signal that the building is not cared for, which in turn may give the impression that the building owner and occupants have a greater tolerance for criminal activity. This could lead to more crime and disorder. 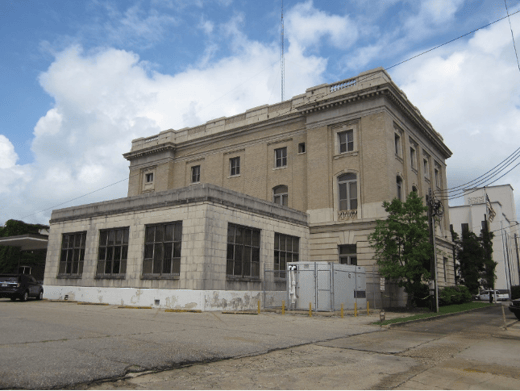 Keeping a building and site well maintained helps bolster the building’s image and the perception that not only are there people in the building who care enough to look after it, but that people are looking out from it (once again, eyes on the street). This may make someone looking to do vandalism or tagging – or even greater harm such as assault, robbery, burglary, or terror – decide not to take the risk.

Legitimate Activity Support. If you fill an area with legitimate activities, the area is less likely to attract criminal behavior. Legitimate activities fill an area with legitimate users, or users who become part of the natural surroundings of that area. In the case of a courthouse – and the area and neighborhood immediately surrounding a courthouse – this could mean pedestrian plazas that provide a park-like setting adjacent to the courthouse for public use, regular farmers’ markets or craft fairs on the streets and sidewalks, businesses that bring pedestrian shoppers to the area, or condominium housing.

Filling an area around a courthouse with members of the public engaged in legitimate activities will create a lively environment and promote an image of a built environment that is filled with many “eyes on the street.” This will result in a safe environment for all who frequent that area, whether walking between the courthouse and nearby parking lots and bus stops, or to a restaurant for lunch. 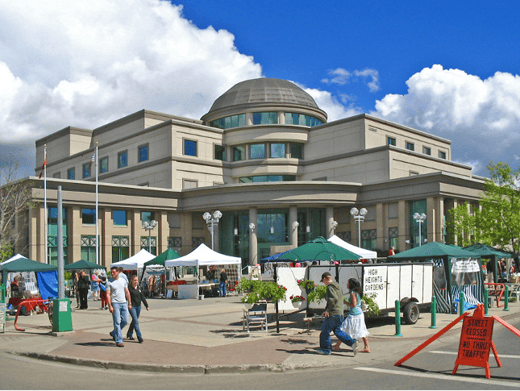 As a leader in most communities or as part of a larger county/municipal government, courts may be able to help support local officials in attracting those legitimate users.

The aim of CPTED is to intrinsically weave security into architecture and the entire built environment. Planners and architects today don’t see security just as the conventional method of denying access to a crime target through door locks, solid block walls, and alarm systems. Some of those methods are still valid, but they only deal with trying to stop a crime that is already occurring.

Instead, practitioners of CPTED strive for a modern approach that considers not just the physical spaces and surroundings, but also how people behave and act.

I’m behind this more holistic approach to security and safety - whether it be a courthouse, office building, or urban redevelopment project. CPTED strategies can change how people act in a place with the goal of reducing crime and fear. These strategies can also help a planner prevent having a built environment that unintentionally supports criminal activity. This more complete strategy for security in the 21st century avoids the need for locking ourselves away in a fortress just to feel safe, and will lead to much safer, functional, usable, and more successful designs.