The Role of the Prisoner Elevator in Courthouse Circulation 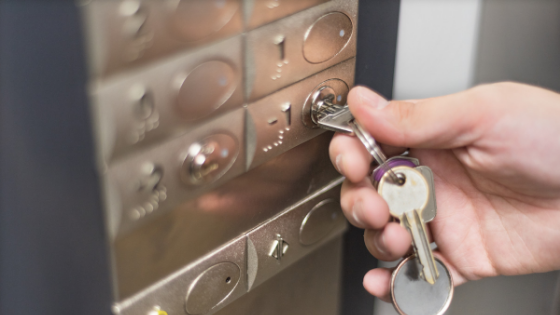 The answer is to bring prisoners from the courthouse’s sallyport and/or central lockup to the courtroom via a prisoner elevator. 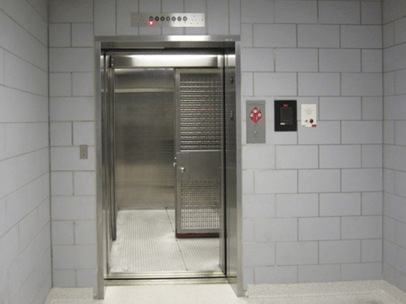 I was in an older courthouse that had a very small and unpartitioned prisoner elevator that two people – one law enforcement officer and one prisoner – could barely squeeze into. The officer showing me the space confided to me that even though they are trained officers who are not easily intimated, he and his fellow officers always feel a little uneasy when confined in that elevator with a prisoner.

In the diagram below, the prisoner spaces and circulation, including the path of the prisoner elevator shaft, are shown in red for a layout in which the courtrooms line up vertically with the central cellblock. 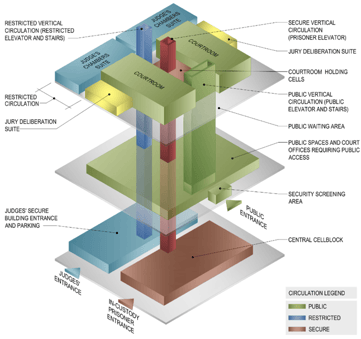 Separation of circulation paths in a courthouse

The floor plans below show an example of such a courthouse. Each of the two prisoner elevators is located directly below each pair of courtrooms, and they are not located within the secure central cellblock. However, they still need to be accessed from the cellblock via secure prisoner corridors. At first glance, it seems a solution could be to provide a secure prisoner corridor from the cellblock to each elevator. However, as the first set of floor plans below shows, this solution would result in the prisoner corridor cutting through first floor space that is well suited for courthouse offices. This would bisect parts of that prime office space by an impenetrable corridor, disturbing internal circulation patterns of the office. 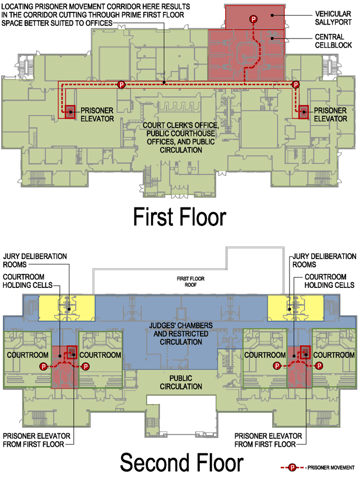 If a secure prisoner corridor cannot be provided on the first floor without disrupting the smooth flow of operations within the office spaces, where can the prisoner corridor go? One answer would be to go down first to access the elevators before going up to the courtrooms.

The building layout in the floor plans below is virtually identical to the floor plans above except a third prisoner elevator has been added that transports prisoners down to a sub-basement. In the sub-basement is a secure prisoner corridor connecting the third elevator to the two elevators that are aligned with the courtroom holding cells on the second floor above. 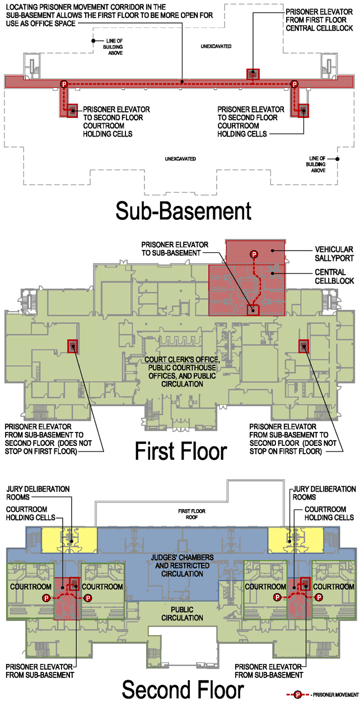 I recently saw another solution to this secure corridor issue in a courthouse in California. In that courthouse, instead of a sub-basement, the secure prisoner corridors connecting the two prisoner elevators were on a mezzanine space above the first floor. I thought this was a great idea. Let me explain how this works.

Often a courthouse design will include an extra-high first floor to give the entry and public lobby space a sense of volume. However, not all of the first floor is part of the lobby; much of it tends to be used for offices that don’t require high ceilings. That extra height space becomes hidden and unused in the space above the office ceilings. The California courthouse took advantage of the otherwise hidden space and put it to use. A mezzanine was constructed above a portion of the first floor, just large enough for a long secure corridor connecting one prisoner elevator on one end of the building with another prisoner elevator on the other end. As in the floor plans above, putting that long corridor on an occupied floor would have had a highly negative impact on any potential office spaces on that floor.

Courthouses Differ, but the Concepts are the Same

Depending on the overall layout of the courthouse, there may be specific alternatives to these solutions, but all should use these same basic concepts, as illustrated above, for safe and secure prisoner movement: