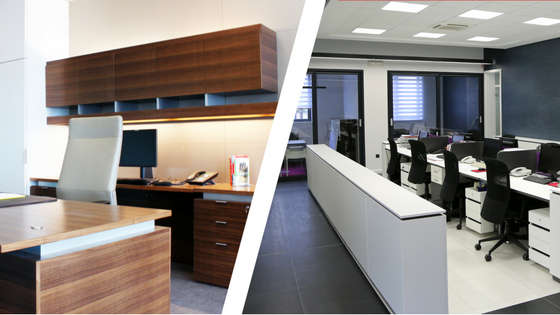 “What about my privacy? Where will I store important documents? How will I have private conversations about sensitive human resource issues?”

These were concerns my friend Liz, who is a manager for a well-known banking institution, shared with me about 18 months ago before her company transitioned from private offices to an open office layout. Although I work for a company that helps organizations transition to an open office environment, I had to admit that her concerns seemed pretty valid. So, that got me thinking. Is it really appropriate for managers to be in an open office with the employees they oversee? Are Liz’s apprehensions shared by other managers who are facing the prospect of transitioning to open office layouts? Is this just simple resistance to change, or something more? And perhaps most importantly, are open offices truly effective even for managers?

To explore this issue, I decided to interview Liz and another friend, Kaitlyn, both of whom are in management positions. Liz now works in a touchdown station in an open office, and Kaitlyn still works in an enclosed private office in a traditional office environment. Both supervise a team of employees. Both need occasional privacy and opportunities to interact with team members. And both have, or had, an initial resistant reaction to the concept of working in an open office environment.

During my interviews, both Liz and Kaitlyn expressed two primary concerns about working in an open office setting:

a) Lack of privacy
b) Being less productive due to distractions

THE TRADITIONAL OFFICE – IF IT AIN’T BROKE, DON’T FIX IT

Kaitlyn is the Director of Client Relations at a small but well-established wealth management firm, with approximately 10 people on her team. She has a clean and contemporary private office with plenty of personal and storage space. Kaitlyn can close the office door and shut out the distractions that seem to go hand in hand with being a manager, especially the seemingly constant stream of employees asking her if she has “just a couple minutes” to go over “one quick thing.” Why on earth would Kaitlyn ever want to give up her private office for an open workstation to be surrounded by the very people who distract her from her work?

When asked if she would be willing to give up her private office and transition her team to a more open office design, Kaitlyn’s exact words were “I would be open (no pun intended) to it, but I fear the additional distractions and interruptions would negatively affect my productivity.” I don’t think it’s going too far out on a limb to guess that most managers with a private office would share Kaitlyn’s fears. So, I was interested in hearing about Liz’s experience and whether her move to an open office did indeed affect her ability to get things done.

Liz is an IT Program Director at a large banking institution, with approximately 60 people on her team. That’s a lot of employees to supervise. Can this really be done without a private office (preferably the spacious corner office)?

Eighteen months ago, Liz’s firm transitioned to an open office layout. After seven years in a private office, she now works at a touchdown station amid a cluster of eight people. Along with three other people, she sits on one side of what her company terms “bench seating,” while four others sit directly across from them. There are no cubicle walls and there is no real privacy. She literally works side by side with members of her team. This is quite a change from the private office with the engraved nameplate, mahogany desk, and other trappings of a prestigious space.

While Liz does occasionally miss being able to concentrate without as many interruptions, she believes that the positives of the mobile office layout far outweigh the negatives. In general, she feels that the open office “creates an energy among team members and in the office overall. People are more energized to collaborate and problem-solve together.”

Both Liz and Kaitlyn spend a large portion of each work day communicating with their teams, both in person and through email. I was interested in what they both had to say about how their space impacts their communications. Kaitlyn certainly feels that a private office is the most conducive environment for focused or sensitive conversations with employees. But Liz offered a different perspective, noting that communication and collaboration with her team have greatly improved since moving to an open office. She said:

“I hear conversations going on around me, so I feel more informed and aware. I feel like I am able to do my job as a manager better because I am able to get a sense about how my team is doing, what they’re working on, what problems they’re trying to resolve, and just how their days are going, in general.”

Proponents of an open office environment would agree with Liz’s assessment. The following points are often cited as advantages of communicating in an open environment:

A BIT OF INGENUITY WORKS WONDERS

Unlike Liz, Kaitlyn hasn’t had to face the prospect of changing her office environment. But since more and more organizations seem to be following the trend of transitioning to open workspaces, I wanted to find out from Liz how she dealt with the actual transition and made it work for her. After all, everyone wants to have a place they call their own in the workplace, and where they can tune out office gossip or loud private telephone conversations from the next workstation. And we have all wanted to escape the pesky pop-in neighbor who chats incessantly about The Bachelor or next weekend’s plans.

Liz told me that a lot of concerns can be alleviated with good open office design. She emphasized that having quiet areas to focus is important. Her company also did something else rather innovative – they incorporated white noise machines to help cancel out some of the chatter coming from the other 100 people on the floor. As a result, Liz is only able to hear conversations that take place nearby. What a brilliant idea!
Other tricks of the open office trade, as shared by Liz, include:

20/20 HINDSIGHT: LOOKING IN THE REAR-VIEW MIRROR

Kaitlyn’s concerns about giving up a private office for an open workspace are probably fairly common among managers. After all, the concept of an open office design for management can seem a little too progressive, and in some ways not well aligned with the role of a manager. Surprisingly, neither of my friends were concerned about giving up their private office because of image, but I’d bet many people still feel the private office should be one of the perks of being a manager.

I believe this is quite possibly one of those instances where you really don’t know how something will work until you try. Or until you have no choice but to make the change. Both of my friends shared the same fears about transitioning to an open office. Liz’s experience, and her positive reaction now, certainly show that the grass really can be greener. Stories like this help us see the opportunities open offices can provide, not just the threats.

I predict that one day, I will be interviewing Kaitlyn in her new modern open office space, and she will provide glowing snippets of how well she has adapted to her open office environment setting. So, stay tuned for part 2 of this “tale of two managers” in one of my future blogs!

Pam Kendall is a statistical data analyst and web developer who likes to spend her free time playing guitar, hanging out with friends, and traveling.