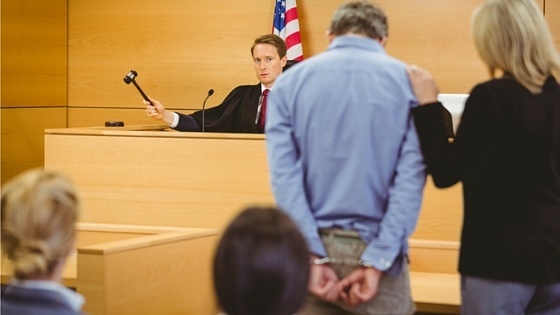 Does your courtroom have the design and technology needed to provide security during a criminal trial? Check out these 5 courtroom security procedures to find out.

Maintaining security throughout a courthouse is important for the safety of judges, court employees, law enforcement staff, and the public. However, maintaining security within a courtroom when these individual participants are assembled near prisoners in a criminal trial is critical.

Achieving a high level of security in a courtroom during a criminal trial involves a combination of factors. When working together, they will ensure the safety of all participants.
These security procedures include:

Let’s look at each one individually.

Courtroom Layout is the Foundation

Of the five points listed above, courtroom layout is perhaps the most important for security. Providing a properly designed trial courtroom is the foundation that supports the remaining four procedures. An improper layout does just the opposite; requiring extra courtroom procedures and technology to correct the deficiencies.

As shown in the following plan, a well-designed courtroom provides separate points of access for the judge, jury, prisoner, and public. (Court staff including court reporters, courtroom security personnel, and clerks may use either the judge’s or the jury’s point of access. Attorneys for either the prosecution or defense may use the public point of access.) 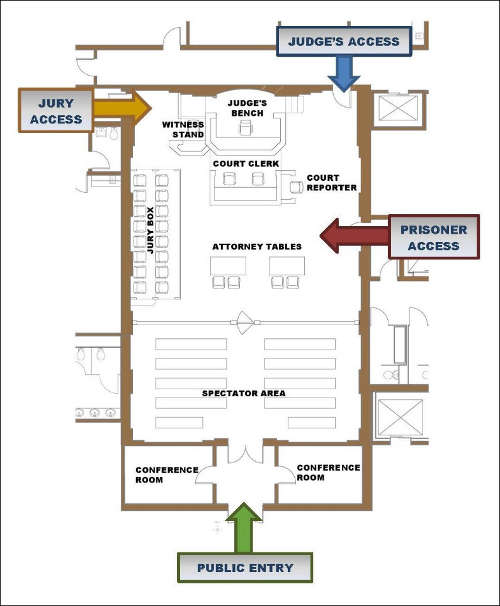 It is vital that potentially dangerous prisoners be kept separate from the other trial participants in the courtroom well. For security reasons, and to avoid possible disruption during a trial, it is also important to separate the public from the proceedings occurring in the well.

These principles of separation are the foundation for the following four supportive procedures.

The most dangerous ingress/egress combinations from a security perspective are:

I have visited several older, historic courthouses where the point of access to the courtroom is combined for the judge and the prisoners because law enforcement officers must use the judge’s restricted corridor as the safest alternative to transport prisoners from the cellblock to the courtroom. This is a potentially dangerous situation that requires considerable attention to keep the judge and the prisoners from crossing paths.

The article, Separating Apples and Oranges, addresses door lockouts and the related procedures that must be used to assure that this interaction does not occur. 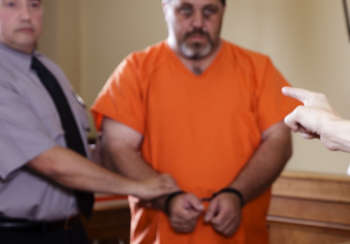 The article also addresses the similar need for law enforcement officers to accompany prisoners when transporting them through public corridors, as well as the need for courtroom security personnel to accompany jurors when they move between the courtroom and the jury deliberation suite.

When addressing each of the above noted dangerous combinations, it is essential to have procedures in place for law enforcement officers and courtroom security personnel that establish a formal sequence of carefully timed movements to limit any possibility of an undesirable interaction between disparate trial participants.

Occasionally, during my architectural evaluations of courthouses, I have had the opportunity to observe law enforcement officers transporting a prisoner from a cellblock located on a separate floor to a courtroom through the public or judge’s point of access. In each of the instances, I have been particularly impressed by the well-planned military-like precision used to manage the sometimes unruly prisoner’s entry into the courtroom. Still, this places an extra burden on law enforcement staff that would not be needed if a dedicated prisoner point of access was available.

It should also be kept in mind, that courtroom security personnel are required during a criminal trial proceeding, to monitor and enforce the adherence to proper security protocols as the trial progresses.

Despite all of the security precautions established for a trial courtroom, sometimes things go inexplicably wrong during a trial, and a prisoner or a spectator becomes violent. In such cases, it is essential to equip the judge’s bench with a duress alarm directly connected to the courthouse security monitoring center. Additionally, full coverage of the courtroom by CCTV cameras, also connected to the courthouse security center, will allow law enforcement officers the opportunity to make a rapid response to any violence occurring during a proceeding.

Disruptive defendants are another potentially dangerous courtroom situation that can be addressed with the correct technology. In such situations, the use of an audio/video feed linking the courtroom and a holding cell, would allow the prisoner to be removed from the courtroom, yet still permit the prisoner to follow the proceeding, as is his or her legal right.

I had the chance to observe this occurring during a courthouse assessment in Buffalo, New York a few years ago. The law enforcement officer with whom I was touring the courthouse became aware of a disruptive defendant in a nearby courtroom and was called on to assist in first clearing the courtroom, and then removing the prisoner to an adjacent holding cell. Following the prisoner’s removal, the public and other trial participants returned to the courtroom where the trial resumed with the prisoner connected by an audio/visual feed to the holding cell.

Providing adequate space between trial participants when seated in the courtroom well is as important as the separation of entry locations. Witnesses, jury members, and the judge should not be positioned near a criminal defendant, nor should the public. 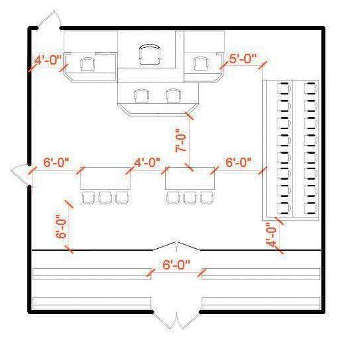 Additionally, to assure an optimal level of safety for the judge (most often the target of a prisoner’s ire), it is important to build the judge’s bench with a ballistic resistant lining using a material such as Kevlar.

Fortunately, I have never been present when a reinforced judge’s bench was needed to stop a bullet. However, I have been reminded of the value of this security measure several times during multiple visits to a San Francisco courthouse, where the judge’s bench in the principal courtroom still sports five rather obvious and large bullet holes. If you look closely at the holes, you can see the steel plate behind the wood panels that stopped the bullets – an explicit reminder of the need for courtroom security.

An optimally functioning courtroom is supported by the facilities noted below and shown in the accompanying plan. 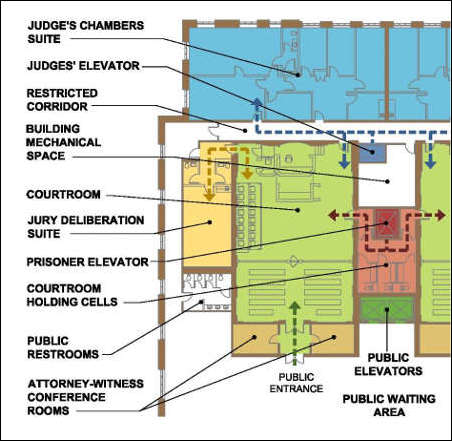 Courtroom support facilities that are adjacent to the courtroom are complimentary to the layout of the courtroom by enabling the following:

Achieving a high level of security in a courtroom during a criminal trial involves a combination of the five factors discussed above all working together. This is clearly the best scenario.

However, if your courtroom is deficient in one of these security procedures, this does not necessarily mean that the courtroom cannot be made safe. A careful analysis of the specific deficiencies in one procedure, may very well lead to solutions involving the other security procedures. 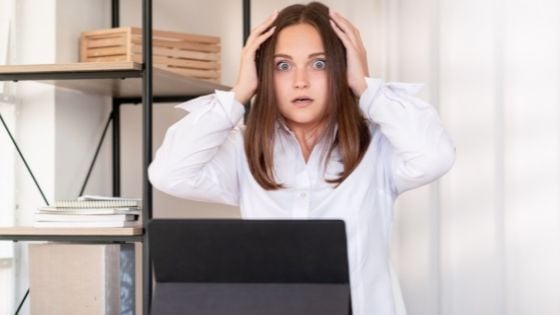 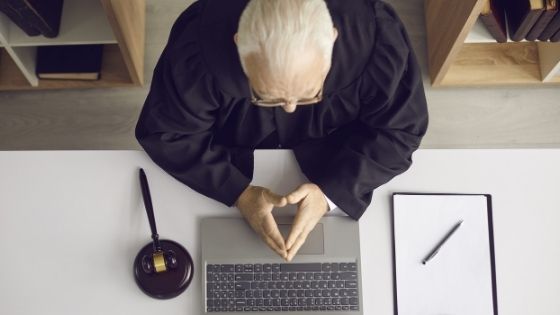