I’ve been troubled by recent events outside of the federal courthouse in Portland, Oregon, and across this country. Sadly, while most of the protests have been peaceful, some folks are taking advantage of the right to protest by initiating violence. As a result, lives are being lost and buildings are being badly damaged.

I had to ask myself, how can we as architects help prepare our buildings for such attacks? In my specific role as a courthouse planner, what should be discussed during the planning of a new courthouse to prevent some of the potential damage? It is an uncomfortable conversation to say the least – but necessary.

I would like to highlight a few design solutions that can help protect a courthouse (or any government building for that matter) during times of civil unrest. I certainly understand that the sheer volume of people associated with some violent protests can be overwhelming, but these steps could possibly delay or deter a violent act for just enough time make a difference.

Being Prepared for a Violent Protest

In a previous blog, we discussed how features such as perimeter security cameras, adequate lighting, and strategic hardscape elements should be installed to monitor and control the activity outside a courthouse. These security elements work well to protect a courthouse on a daily basis, and even during peaceful protests. Unfortunately, as we have seen recently, a peaceful protest can quickly turn dangerously violent. In such instances, the physical facility could be at risk. Debris is frequently thrown at the building, confrontations between security personnel and violent protesters often occur, and fire sometimes plays a large role in the upheaval. All of these things can cause significant damage to the building and to other property located on the site, such as vehicles, statues, etc. Below are some other design features to consider when planning a courthouse to further protect the courthouse from acts of violence.

When siting the building, provide as much of a setback from the property line or curb as practical. Features such as bollards, planters, trees, and built-in seating are often located within the setback area to help protect the building from vehicle intrusion. During times when there is a known threat to the courthouse, a temporary barrier could be erected as a standoff measure. If the building is in a location where there is limited distance to the curb, a temporary standoff barrier could be constructed beyond the setback area. This barrier can help keep violent protesters away from the courthouse. If the line of protection is breached, law enforcement personnel often have a better visual of the oncoming threat, providing them with additional time to respond.

If possible, conduct a risk assessment of the courthouse to determine its vulnerability based upon tenant operations, facility size, and location. Typically, the required setback and/or standoff distance can be determined based upon a combination of the risk analysis, a blast design, and the level of protection desired. Keep in mind that it could be different for each side of the building.

The first picture below shows how site design features such as setbacks and hardscape elements can help keep a protest away from the building. The next picture shows a temporary barrier that was erected to serve as additional protection against the threat of violence. 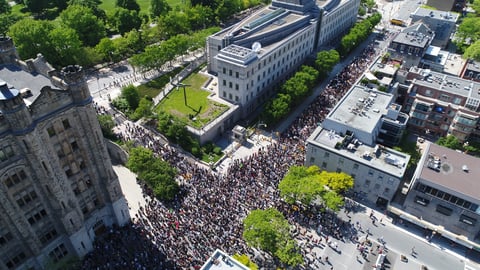 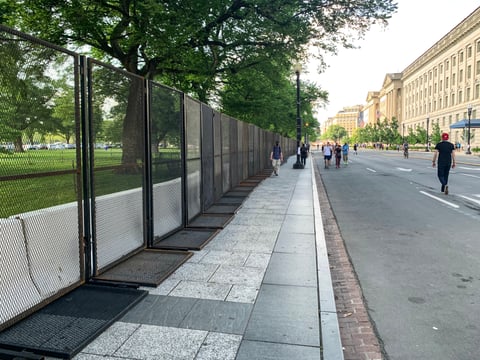 Angled Glass on the Ground Floor

Vertical glass around the lobby of a courthouse takes a direct impact when debris is thrown. Instead, the glass can be sloped downward at an angle to repel thrown objects. The glass can also be hardened to obscure visual surveillance of the interior, which can help prevent a targeted assault.

A water feature around the perimeter of the courthouse can deter violent protesters. Visions of a moat may come to mind, but there are many modern-day designs that have a similar effect. Decorative marshy or dry moat areas, riverbed landscaping, and other similar solutions can be designed into more rural locations. Vertical water fountains and decorative reflecting pools are often utilized for this purpose in urban areas. Even lawn-sprinkling systems act as a deterrent because people usually avoid getting wet, and the sprinklers can make fires more difficult to start. All of these features are welcoming to the public while also serving as a buffer between the courthouse and violent protesters during times of unrest. If water mitigation is an issue on the site, consider designing the retention area as a water feature that could also serve to protect the building. 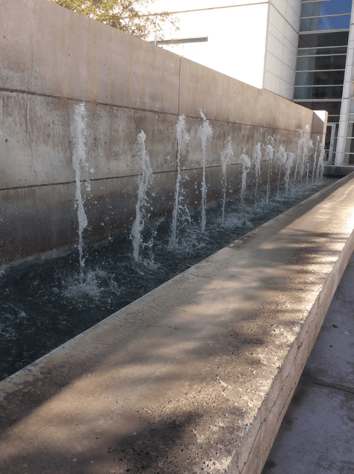 Consider providing bright security spotlights on the exterior of the courthouse. They should be strategically located to shine directly on the areas most likely to draw protesters. The spotlights will obscure a person’s line of sight into the courthouse and could disrupt the focus of an attack. Such spotlights also enable security personnel to better monitor the crowd – even during times of peaceful protest. 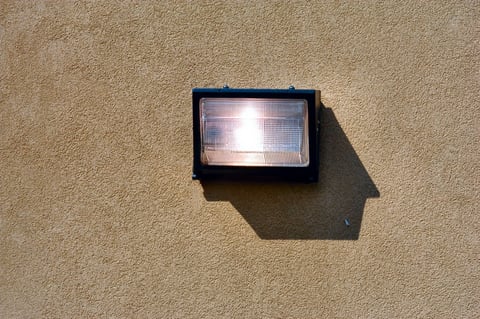 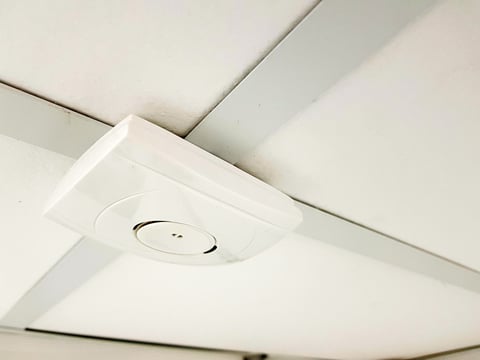 To help prevent fires from being started, carefully consider the location and physical protection of the loading dock (where equipment or pallets may be stored) and/or trash dumpsters when designing the courthouse. These are prime targets for fire starters and should be located a sufficient distance from the standoff area to prevent arsonists from lighting stored items or trash on fire. Additionally, secure parking for government vehicles within an area protected by fencing or in a parking garage under the courthouse as vehicles are often damaged and/or set on fire during periods of civil unrest.

The image on the left shows a parking situation where the government vehicles are located directly adjacent to the building and are secured only by an access bar that can be easily breached. If parking can be designed underneath the building, as shown on the right, vehicles can be easily monitored and protected.

Of course, each courthouse project has its unique circumstances, and many have more pressing problems to solve in terms of the courthouse design. However, the issue of the potential damage that could be inflicted upon a courthouse during a violent protest should not be ignored. When site conditions permit, implementing strategies such as those mentioned above could provide security personnel with the time they need to defend themselves and to protect the courthouse if things turn violent.

During Matt’s career, he has been involved in many successful projects and facility types, such as courthouses, land ports of entry, hospitals, outpatient medical office buildings, assisted living facilities, and general office space for large corporations. Matt enjoys music and running, and likes to cook.