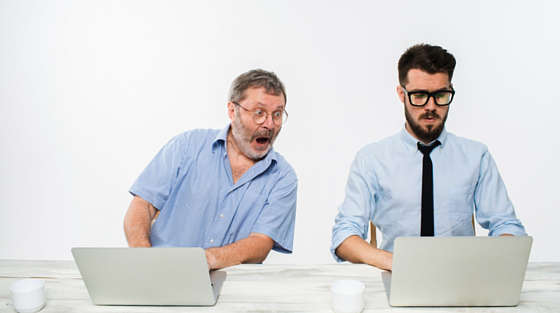 You can learn a lot from post-project evaluations – what was successful, what didn’t work out quite as well, what mistakes to avoid in the future, etc. These evaluations can also provide an informative, and sometimes amusing, view of human behavior, and the creative ways that occupants end up using – or rather misusing – their well-intentioned work spaces. This post describes five typical concerns employees have about open office design environments and how they respond, sometimes using very creative tactics.

Humans are remarkably resilient beings, able to adapt to a wide range of changing situations (just think about the baby boomers who grew up in homes with a radio and maybe one black and white television who are now exceedingly comfortable ordering from Amazon, email and text with ease, and Google with abandon). So, in a new office design, you can throw a lot of changes at a group of people and, while you may get some resistance or complaints, the employees will generally adapt to their new environment. But it’s how the employees adapt that provides critical insight in post-project reviews.

Whether employees previously worked in individual private offices or enclosed workstations, the number one concern in a new open office design environment is the lack of acoustic privacy. Employees complain about the inability to focus on their work or the need to change workspace locations to avoid excessively loud – or in some cases, obnoxious – co-workers (Dilbert cartoons about loud or annoying coworkers are really funny, until you’re the one living through the situation).

The human response to this can be found in several areas. First, there tends to be a run on the shared workstations that are located in more private areas, even if they aren’t enclosed spaces. Another workaround is used by employees who resort to wearing noise canceling headphones during the workday so they can listen to their desired background noise without being distracted by the work going on around them. Unfortunately, the predictable result of this latter response is a decline in face-to-face communication and an increase in email or instant messaging, which defeats one of the goals of an open office setting – enhanced collaboration and communication.

Finally, employees adapt by using get-away booths and collaboration rooms for private conversations. After all, that’s why these spaces are provided. However, to be effective, these spaces must be constructed with full-height walls that extend to the slab above the ceiling tiles (rather than with just demountable partitions or walls that extend to just the ceiling tiles). Because this construction is more expensive, some organizations forgo this, with unfortunate, yet entirely predictable results. (Imagine exiting one supposedly “private” space after a personal call with your significant other, only to discover that half of the office heard you discuss the evening’s plans, including whether to order Chinese or pizza for dinner and what movie to watch.)

The solution is to be sensitive to the concerns about acoustic privacy and to provide a mix of spaces that provide the opportunity for employees to conduct confidential business, or at least discuss whether the night’s movie selection will be a rom-com or the latest Fast and Furious without the rest of the office sharing in the decision-making conversation.

Number two in the lineup of employee concerns, right behind acoustic privacy, is the issue of visual privacy in a shared mobile/collaborative workspace environment.

Just as employees don’t want to be overheard, they similarly don’t want their personal electronic data being observed by co-workers in adjacent workstations or touchdown booths. It’s important to recognize that in today’s highly technological, connected environment, this personal electronic data extends beyond private or confidential work-related content. Just as employees make personal calls during a work day, they also conduct personal business online, including scheduling doctors’ appointments or even making online purchases. (Show of hands – who’s contributed to the cyber-Monday phenomenon after Thanksgiving? And yes, my hand is up.)

So what is the human response to the lack of visual privacy? In some cases, this response gets very creative. The following photo depicts one such “solution” in what the design team thought was a well-conceived, individually assigned open office design workstation area. The new workstations had been designed with frosted glass partitions to provide acoustic privacy while simultaneously avoiding the claustrophobic effect created by the classic hard-wall cubicle.

Apparently, this was not enough privacy for one employee, who added his own twist on workstation wallpaper. While admittedly effective, this was not an after-market addition anticipated in the original design development – particularly in an office that wasn’t located anywhere near Florida (somewhere in the south, a vacation house is missing its flamingo shower curtain!). 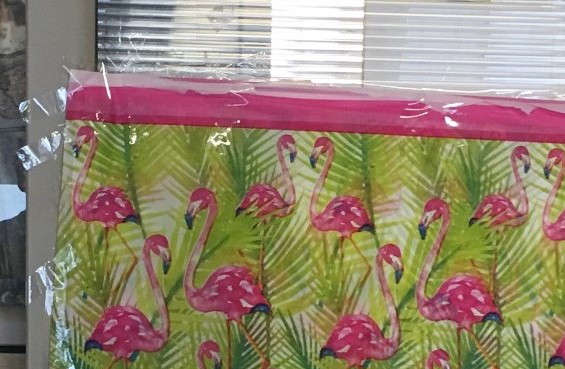 3. Conference Room Hoarding: Longing for the Past

After many long years of considerable effort devoted to attaining individual or corner office status (especially if multiple windows are involved), many employees are understandably reluctant to give up the perceived perks and visible representations associated with this status. In a similar observation about assigned workstations, a front page Boston Globe article noted that, “despite the assertion that nothing crushes the soul of creativity like an office cubicle farm, once we lose our cubicle, we miss it.”

So what happens? What’s the human adaptation to losing one’s assigned space? Employees resort to reserving collaboration rooms for personal use; effectively playing the system by using them as a replacement for a private office.

This behavioral response circumvents the intent of an open office design, where employees share the collaborative spaces to, well, collaborate with each other.

One solution that is often suggested by managers is to simply add more collaboration rooms. But this doesn’t solve the problem of employees using these collaborative spaces as their own private offices.
Instead, a more effective way to address this is with a well-planned change management program that begins before the project is underway and continues through construction and occupancy. This approach ensures that employees are oriented into the proper uses of the complement of spaces and more importantly, sets the stage for the new culture of what constitutes “status” in the workplace (hint: it’s no longer the oversized corner office with the wall of family pictures and rows of windows).

4. Workplace Homelessness: Not Yet Adjusting to New Concepts

This issue is in many ways the result of the prior three concerns. Employees who change workspace locations during the workday because of sunlight and temperature fluctuations or acoustic or visual privacy concerns, or who have given up their sense of place associated with their status, often express a sense of “workplace homelessness.”

These employees who once used their assigned office or workstation as both a place to work and as a relatively controlled place of personal refuge, tend to describe themselves as migrant workers or even squatters in the new office environment.

Often these “homeless” employees gather in open hallway areas and use them as their water cooler, which is not necessarily bad as long as it’s not disruptive to work being done around them (after all, they are being more collaborative in the new environment). But another unexpected human response that has occurred, a response that is not as productive, is that these self-perceived “homeless” employees will simply leave the office earlier in the day and either work from home or adjourn to an outside private coffee shop just to have a stable work environment.

What’s the answer to this? As with all of these concerns, an effective change management program that supports the new culture is important. In addition, updated policies that address work time away from the office, that are agreed to by the workforce, also help to establish the boundaries of when it’s okay to telecommute from a remote location.

5. Supporting Technology: Not Optional in an Open Office Design

The role and importance of technology in today’s mobile and collaborative work practices and open office design environments is well-documented. Unfortunately, in some cases, organizations choose to spend their resources in other areas during space transformation projects, disregarding the need for the modern technology that is required to support the new environment.

The desire to transform an office into a more productive and professionally satisfying environment is certainly a commendable move by an organization’s management. But without the corresponding technical improvements – in both hardware and software – to support the new office, the effort is incomplete, at best. After all, it’s difficult to work remotely or be more mobile in the new office setting if the email platform isn’t set up for mobile access. And ignoring the need for a wire management system in a collaboration room, as illustrated in the following photo, creates an unsafe and frustrating condition when the room’s users have to reassemble the connections or crawl around under the furniture before each meeting. 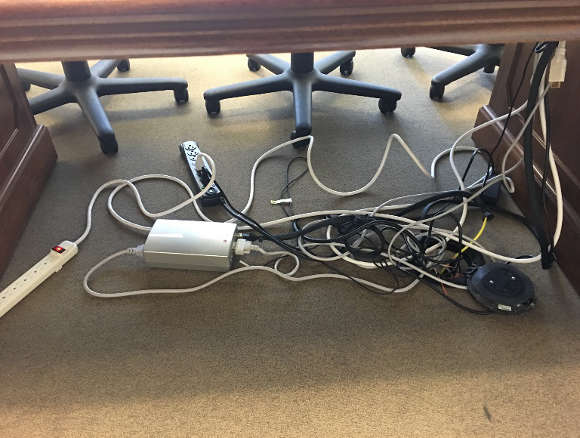 The human response to this type of situation? Sometimes it’s manifested in creative jury-rigging, often involving duct-tape (it’s not necessarily an attractive fix but there’s almost nothing that can’t be fixed with a little duct-tape!). At other times, the response is that employees avoid situations where their technology doesn’t work or makes their work more difficult. In an environment designed for more mobile work, but where the software hasn’t been updated to support this, the predictable result is fewer employees taking advantage of a telework policy and increased frustration in the now-overcrowded office spaces.

None of the five concerns described above are beyond the ability of design professionals and an organization’s management team to address and resolve before starting a space transformation project. Simply stated, these predictable results can be avoided by simply being aware of them, and the potential human responses before starting a project. This awareness, and the ability to observe the ways employees respond and adapt to the new workplace ecosystem after a project is complete, combined with the willingness to continue to make improvements, will help ensure a smooth transition to a new space long after that space is actually occupied. After all, sometimes a pink flamingo shower curtain can be far more effective in communicating lessons learned than a multi-volume, post-occupancy evaluation report.

0 Comments
previous post Recipe for Successful Courthouse Planning: Equal Parts Analysis and Architecture
Next Post Nothing but the Truth: The Witness Stand in Courtroom Design 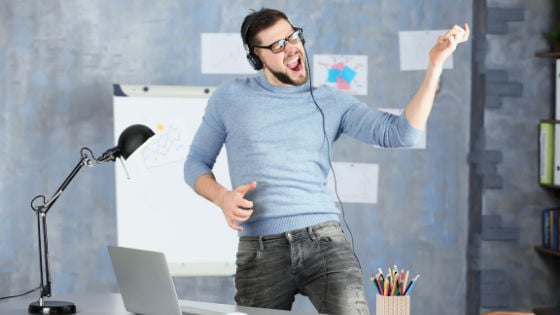